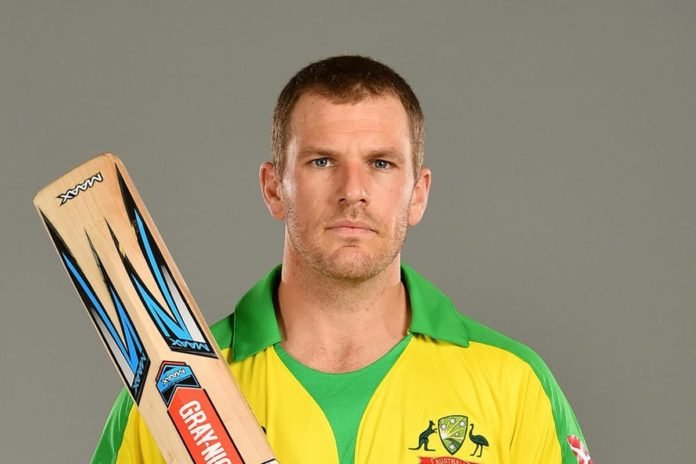 Aaron Finch is one of the finest cricketers in Australia. He started as a Twenty20 specialist but ended up cementing his place in the 50-over format of the game as well. Aaron Finch fans love his hard-hitting ability as a batsman. Amongst the super talented Aussie cricketers, Aaron Finch is a wild card who made it big.

Aaron Finch’s career got off to a humble start during the 2007/08 season. In Australian state domestic cricket, he represents Victoria, a team based in Melbourne. In March 2021, he became Australia’s highest run-getter in the shortest format of the game (surpassing fellow teammate and opener David Warner). Aaron Finch was the first cricketer to score 150+ in a T20I match. He achieved the feat against England during a Twenty20 match at Rose Bowl. In July 2018, he went past his best T20I score of 158 after he scored 172 in a match against Zimbabwe in Harare. Considering the limited amount of time provided by the shortest format of the game, such long innings are a truly exceptional achievement.Finch also captained Australia during the 2019 edition of the ICC Men’s Cricket World Cup. His side reached the semi-final of the tournament, only to be defeated comprehensively by England, the eventual champions. Aaron Finch is an opening batsman who can bowl occasional left-arm orthodox spin.

Aaron Finch’s birthplace is Colac, a small town in Victoria. He grew up watching the likes of Steve Waugh, Mark Taylor, and Virender Sehwag. As a youngster, he played Australian Rules Football and made a name for himself in the world of professional sports. Aaron Finch’s cricketing career began when he started playing for Colac West Cricket Club. It is interesting to note that he started his career as a wicket-keeper who could bat. However, the team management decided that he should open the batting. They were obviously in awe of his ability to hit the ball a long way.

Aaron Finch’s parents are Gary Finch and Sue Finch. We don’t know much about Aaron’s parent’s professional life. But we do know that he has a brother (Matt) and a sister (Jess). He attended the Victorian Primary School. It was here that he started participating in Australian Rules Football.

In 2018, Aaron Finch married Amy Griffiths, a Network Integration Specialist working for the Australian Radio Network. They got engaged in 2016, and finally married on the first day of the IPL summer. In March 2021, the couple revealed that they were expecting their first child, a baby girl.

Aaron Finch’s first-class debut for Victoria was against the Indian touring party in the winter of 2007/08. As of 2021, he has nearly 5,000 first-class runs in his kitty at an average of just under 36. His highest score in first-class cricket is 288.

A set of consistent performances with the bat earned him a maiden call-up to the national side. He made his T20I debut in 2011 against the visiting English side. However, he had to wait for a couple of years before making his ODI debut, which came in August 2013 against the Sri Lankans. Aaron Finch’s maiden ODI century came against Scotland in Edinburgh. He ended up scoring 148 off 116 in the match.

Early on, he was included in the team as a middle-order batter but was asked to share the opening duties with David Warner after he showcased his mettle at the top of the order.

In 2014, Cricket Australia awarded him the T20I Player of the Year award, along with the coveted Allan Border Medal.

Finch scored a century (135) against England during his ICC Men’s World Cup debut in 2015.

He was an important part of Australia’s world cup winning squad in 2015. He got the team off to decent starts in almost all of the matches during that tournament.

Aaron Finch as a T20 Specialist in Franchise-Based Leagues

Finch is linked with numerous T20 Leagues across the globe. Aaron Finch has played for as many as eight (8) different franchises in the Indian Premier League (IPL). His debut IPL season was for the Rajasthan Royals in 2010, wherein he played as a middle-order batsman.

He represented the Auckland Aces, a domestic team in New Zealand, as one of their overseas players (2012/13). In the Big Bash League (BBL), he has been playing for the Melbourne Renegades since the 2011/12 season of the BBL

Punjab Kings purchased Aaron Finch before the commencement of the 2021 edition of the Indian Premier League. He played in the tournament in a bid to improve his batting record in the Indian sub-continent. Also, he believed that this stint with Punjab Kings would provide him with some much-needed game time. However, Aaron Finch’s IPL T20 campaign was halted as the League got postponed in the wake of rising COVID-19 cases in the country. Aaron Finch, with all his experience and hard-hitting ability, is one of Australia’s trump cards (at the top of the order) going into the 2021 ICC Men’s World Twenty20.

Aaron Finch was made Australia’s skipper in the ODI format in 2018. The announcement came after David Warner and Steven Smith were both handed bans for their dubious role in the Sandpapergate Saga of 2018 (South Africa). Aaron captained the side for more than a couple of years. During his stint, he got the coveted opportunity to lead his side into the 2019 edition of the ICC Cricket World Cup. Recently, Alex Carey replaced Finch as the captain of Australia because he suffered an injury just before the West Indies tour.

Aaron Finch’s net worth is US$ 5.5 million. At 34, he is one of the most experienced Australian cricketers playing in the current Aussie squad. Despite being in the autumn of his international career, he is considered a vital cog in the wheel by the Australian think tank. As far as assets go, Aaron Finch has a beautiful house located in the South West of Melbourne.