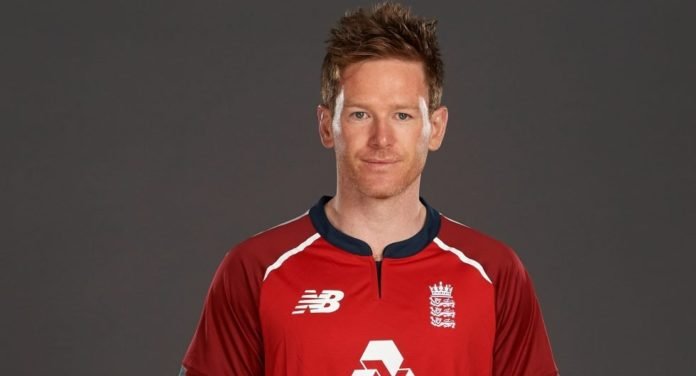 At present, Eoin Morgan is England’s leading run-scorer in 50-over cricket. He has more than 6,500 runs in his kitty for England in his ODI career. Miller is England’s longest-serving captain in both ODI and T20 cricket. Eoin Morgan’s international career is a symbol of his hard work and dedication.

Morgan is the first cricketer to play 100 T20Is for England. He achieved this feat while playing against India in March 2021. Born in Dublin, he is one of the many cricketers of Irish origin who have gone on to ply his trade for the English National Cricket team.
Eoin Morgan is one of the finest cricketers in the limited-overs format. He is known for his aggressive stroke play. Morgan is a middle-order batsman who can get the big shots in during the middle overs. Eoin Morgan’s batting revolves around one thing, i.e., calculated risk-taking. He maneuvers the ball around during the early part of his innings before cutting loose.

Eoin Morgan is a catholic. He is an ardent churchgoer.

Eoin Morgan was born in Dublin, Ireland. His father is Jody Morgan. Eoin Morgan’s parents lived in Ireland during the early part of his childhood. Although his mother is English, he played for Rush Cricket Club in Ireland. It is pretty interesting to note that Jody, his father, was the 3rd XI captain of Rush CCC.

Eoin has two sisters (Gwen and Laura) and two brothers (Gavin and Gareth). Eoin Morgan’s wife is Tara Ridgway, who worked as a marketing coordinator for Burberry in London. She was born in Adelaide to David Ridgway, an Australian politician. Leo Louis Oliver Morgan is Eoin and Tara’s first child (born March 9, 2020).

Eoin Morgan Domestic Career in Ireland and U-19 World Cup

Eoin Morgan’s domestic career began in Ireland after he began practicing with Rush CCC. Morgan was the captain of Ireland U-19 during the ICC U-19 Cricket World Cup 2006. It is interesting to note that he is the highest scorer in the history of U-19 World Cup with 606 runs. He also played briefly for Finchley CCC

Eoin Morgan’s ODI debut was against Scotland in 2006. He played ODI cricket for the Irish National Team as a specialist batsman. He was part of the Ireland squad that participated in the European Championships and became the first batsman in ODI history to be dismissed on 99 (on debut). In all, Morgan played 23 One Day Internationals for Ireland and scored close to 750 for the team at an average of 35.4.

Morgan could play for England as he held a British passport and his mother was English. Middlesex CCC roped him in as a specialist batsman ODI batsman. He joined Middlesex in 2005 and has been playing for them ever since making his debut in 2005.
In 2009, he was included in the list of 30 probables for ICC Men’s World Twenty20. This meant he could no longer play for Ireland, the country of his birth. He made his T20I debut against the Netherlands in June 2009. Morgan could make just six before getting out. England lost the match (quite unexpectedly).

In T20 Leagues Across the Globe

Eoin Morgan is a popular name and face in T20 Leagues across the globe. The Royal Challengers Bangalore brought in Morgan in as one of the overseas recruits before the 2010 edition of the Indian Premier League (IPL). He has represented as many as four IPL franchises in the IPL. Barbados Tridents asked him to join them as one of their overseas players in 2017. Morgan has also played for Sydney Thunder (BBL), Peshawar Zalmi and Karachi Kings (PSL), and Tshwane Spartans (MSL). He has performed exceptionally well in various leagues across the globe, which makes him one of the most popular T20 cricketers in the world.
He was part of the Kolkata Knight Riders in IPL 2021 and saw it as an opportunity to up his game on the low and slow pitches before the ICC Men’s World T20 commencement. Unfortunately, things did not go as planned and his scores in the IPL were poor.

Eoin Morgan led the England side into the 2016 edition of the ICC Men’s Twenty20 World Cup. England reached the final, where they lost to the West Indies. Three years later, he was the center of attraction as England won the ICC Men’s Cricket World Cup for the first time. Come 2021. He is one of England’s key players going into the ICC Men’s World T20. He is one of the cleanest strikers of the cricket ball and can hit sixes at will once he has got his eye in. Also, his calm and composed persona makes him ice-cool in critical situation, which is one of the reasons why he is considered a top limited overs player.

Eoin Morgan got into a sponsorship deal with Captain Morgan, a prominent rum brand in Jamaica. The deal was materialized in 2017. As part of the deal, Eoin had Captain Morgan’s logo on his bat whilst playing. Also, Eoin endorsed CA Plus 20K Morg Limited Edition Cricket Bat after the 2019 edition of the ICC Men’s Cricket World Cup 2019.

Morgan is one of the richest cricketers in England despite featuring in just the limited-overs formats of the game. He makes good money by featuring in some of the most significant franchise-based leagues in the world, including the Indian Premier League (IPL). At present, Eoin Morgan’s net worth is GB 2.3 million. Expect it to soar if he’s able to win the T20 World Cup this year.