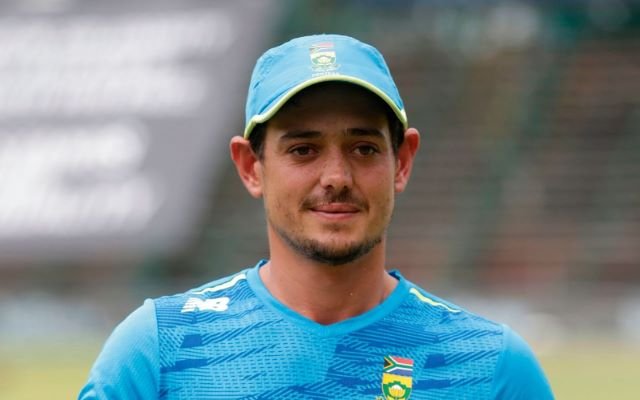 Quinton de Kock has all the qualities of a modern-day wicket-keeper. Combine a dynamic wicket-keeping technique with an outright aggressive batting technique and you will get a Quinton de Kock. The lad from South Africa is perhaps the most attacking batter in the modern game. He plays as an opening batsman and can smack the ball a long way despite lacking those rippling muscles like the one flaunted by Chris Gayle.

There is something immensely likable about Quinton de Kock. He is someone who can score runs at the top of the order with relative ease. Be it the first ten overs or the middle overs of an innings, De Kock hits the big shots without much sweat. He is one of the experienced batters in an otherwise inexperienced South African ODI/Twenty20 side. Quinton de Kock’s career skyrocketed when he opened the batting alongside Hashim Amla.

Over the years, Quinton de Kock has become one of the most consistent all-format cricketers of the current generation. He opens the batting in both the white-ball formats, but bats at number 6 (primarily) in red-ball cricket. He started with Highveld Lions in first-class cricket but moved to the Titans after the 2015 first-class season.

Quinton de Kock loves fishing when he is not playing cricket. Also, he is a Christian and visits the church on a regular basis.

Quinton de Kock played for Highveld Lions during the early part of his career. He played for the Lions till 2015. The same year, he shifted loyalties and joined the Titans. De Kock represented South Africa during the ICC Men’s U-19 World Cup in Australia. He performed consistently during the tournament and ended up scoring 284 runs. Quinton de Kock’s debut in 2009-10 first-class season was fabulous. He was instrumental in taking the Highveld Lions into the final of the 2013 edition of the Ram Slam Twenty20 Tournament. He is also the second player to score four (4) ODI centuries before turning 21. His penchant for scoring centuries is evident from the fact that he had already scored five centuries before he played the 20th match of his career.

Quinton De Kock’s test debut came in 2014 against Australia@ Saint George’s Park in Port Elizabeth. He scored just 7 runs in his debut innings before scoring 34 in the second innings. He became South Africa’s all-format keeper after AB De Villiers decided not to take up the wicket-keeping duties in order to concentrate on his batting. He has become one of the finest wicketkeepers in the world (as of 2021). Quinton de Kock’s captaincy tenure began in October 2020 as he captained the national side after Faf Du Plessis was removed. He was hired as captain temporarily. He was relieved of his duties as the skipper after the series against Pakistan in February 2021. Subsequently, Temba Bavuma took over as the ODI captain while Dean Elgar took over the role of captain for the red-ball side.

Quinton de Kock’s aggressive mindset makes him a popular cricketer in the shortest format of the game. He played regularly for the Highveld Lions in the Ram Slam Twenty20 cricket tournament during the early part of his career. He has represented various franchises during his stint in the IPL T20 tournament. He played for Sunrisers Hyderabad in the 2013 edition of the tournament. He got limited chances to play for the Sunrisers as he was an overseas wicketkeeper. It wasn’t because of his lack of talent but due to the tendency of franchisees to use overseas recruits who are all-rounders or batters (wicket-keepers are mostly native). The next season, he was roped on in by Delhi Daredevils (Capitals). He stayed with the Delhi franchise for three (3) years. He was signed by the Royal Challengers Bangalore before the commencement of the 2018 edition of the IPL. His exploits in the IPL T20 tournament. He was signed by the Mumbai franchise in 2019 and played a major role in his side’s victorious IPL campaigns in 2019 and 2020. He plays for the Southern Brave in the ‘Hundred’.

He played for the Southern Brave as part of the ‘Hundred’ to work upon his hitting ability. The lad from Gauteng performed reasonably well during the 2021 season of the Indian Premier League before the tournament got postponed because of the ongoing Coronavirus pandemic. De Kock is a T20 specialist and can smash the ball a long way once he gets going. He holds the key to South Africa’s fortunes in the upcoming ICC Men’s Twenty20 World Cup this year. His contributions at the top of the order will be important throughout the tournament. If South Africa wishes to win the tournament, then De Kock will have to come of age.

Quinton de Kock has endorsed a wide range of brands. He was the ambassador of Adidas, a popular German sports gear and apparel brand. Gunn&Moore also struck a sponsorship deal with Quinton de Kock. His recent bat sponsor is Sareen Sports. All in all, it can be said that he has a wide range of sponsorship deals under his kitty as he is one of South Africa’s most accomplished players. Other prominent brands are also looking to collaborate with Quinton de Kock in the near future.

Quinton de Kock’s net worth is estimated to be somewhere around US$ 11 million, thanks in part to his age and stature. He is one of South Africa’s most reliable cricketers. His net worth is expected to grow leaps and bounds because of his popularity in T20 leagues across the globe, including the cash-rich IPL T20 tournament. Watch him in action in the upcoming ICC Men’s Twenty20 World Cup