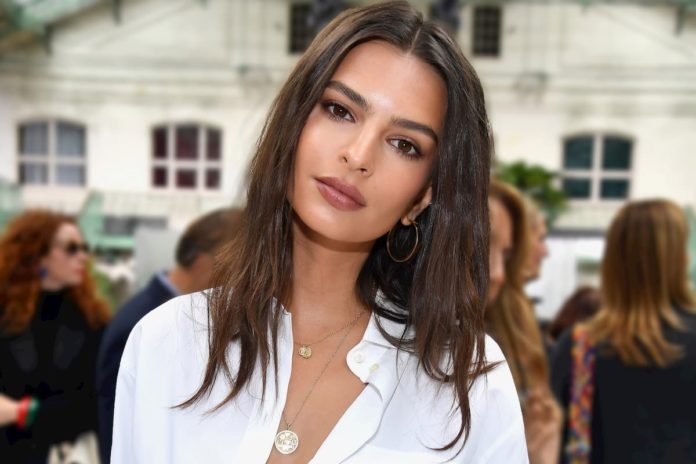 The song gained immense popularity and topped the musical charts across various countries. Moreover, Emily Ratajkowski’s Blurred Lines makeup became the talk of the town because of its fresh look and feel.

Ratajkowski has also walked the ramp as a fashion model at the New York Fashion Week and the Paris Fashion Week for Versace, Dolce & Gabbana, etc.  Emily began her acting career when she was a child. She was casted in iCarly (2009-2010). The show was aired on Nickelodeon and became a success. She made her Hollywood debut as a mistress in ‘Gone Girl’ alongside Ben Affleck.

Emily O’Hara Ratajkowski was born in the UK to parents of American origin. Emily Ratajkowski’s parents are Katherine Balgley and John David Ratajkowski. Her family left London when she was five in order to settle in the US. Katherine, her mother, earned her PhD. from the University of California. Her parents met each other whilst the both of them were teaching at the San Dieguito Academy. At the time of Emily’s birth, her mom and dad were aged 39 and 45, respectively. As a child, Emily grew up in and around the vicinity of Encinitas.

As a child, she was always taunted by people for being a baby woman. Well, that is because her face reflected innocence. However, she worked hard on her fitness and transformed herself into one of hottest fashion stars around.

Emily Ratajkowski is vocal about sexual and reproductive health. She is known in the media for her strong views on matters pertaining to sexual expressions. During an interview, she stated that she would rather ‘annoy’ people than hide her beliefs. She was rated as one of the most desirable women in the world in 2014 and 2016. Harper’s Bazaar kept her on top of its list in 2016 as one of the most well-dressed women at the New York Fashion Week in 2016.

In March 2016, she found herself in the middle of a controversy when Ratajkowski defended Kim Kardashian for posting a nude photograph of herself on social media. Ratajkowski opened up on letting women express their sexual freedom without hesitation. Within no time, her comments were supported by over a million social media followers.

Emily Ratajkowski supported Bernie Sanders and endorsed his campaign in 2016. Also, she supported Sanders yet again in 2020, this time under a Democratic nomination.

Emily Ratajkowski’s workout routine has been in the news for a long time. During an interview, she stated that she isn’t a ‘gym person’, but likes to practice yoga.

Emily Ratajkowski’s acting journey began in 2004 after she starred in a short film, titled ‘Andrew’s Alteration’. She starred in the short film as a young girl. However, her film debut (as an adult) came in 2014 when she starred as Andie Fitzgerald in ‘Gone Girl’ (2014). She played the role of the mistress of Ben Affleck’s character in the movie.

The movie, along with Emily’s performance in the movie, was received positively by the critical fraternity. After a promising beginning, she starred in numerous big-budget productions, including Entourage (2015), I feel Pretty (2018), In Darkness (2018) and Lying and Stealing (2019). Her performance in ‘in Darkness’, albeit brief, was applauded by the critics as many thought she looked ‘charming’.

Apart from starring in movies and TV shows, Ratajkowski is also a fashion model and has walked the ramp for various prominent brands across the globe. She is also a popular face on television and has starred in various music videos, including the very popular ‘Fast Car’ music video by Talo Cruz. Emily Ratajkowski’s music videos are loved and watched by viewers in different parts of the world.

It was in 2014 that Emily Ratajkowski and Jeff Magid had begun dating. Jeff is a musician known for his obsession with hats. As of 2018, the duo had separated.

In October 2020, many pictures of Emily Ratajkowski showing off her baby bump began circulating on the internet. In 2014, Emily Ratajkowski became a victim of hacking after many of her nude photographs were posted online by hackers.

Emily Ratajkowski is believed to be the next big thing in the world of showbiz and entertainment. She is a popular social media influencer/model who knows how to take a stand for what she thinks is right. At present, Emily Ratajkowski’s net worth is estimated at US $6 million. However, it is expected to soar beyond limits as and when her popularity grows.