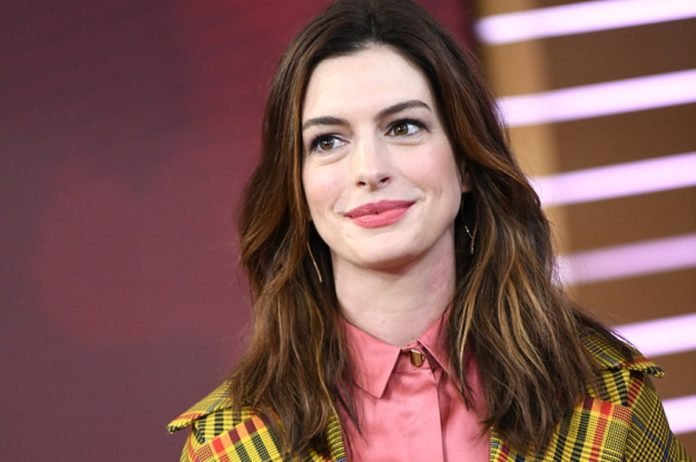 Anne Hathaway is one of the most successful actresses in Hollywood. She has won many prestigious awards for her acting skills, including an Oscar for the movie ‘Les Misérables’.

She made her breakthrough in the industry as a teenage actress in the movie ‘The Princess Diaries’. But slowly and steadily, she mastered the art and emerged as a versatile actress to became a prolific superstar.

She has donned many hats as an actress. Anne Hathaway Cat woman character is one of the most memorable characters in the DC Universe and her portrayal of the assistant of uber-talented Meryl Streep in ‘The Devil Wears Prada’ is unforgettable.

Anne Hathaway is regarded as one of the most talented actresses in the world and has been frequently compared with legends like Audrey Hepburn and Judy Garland.

Currently, Anne Hathaway is married to Adam Shulman and has two sons Jonathan and Jack. But her present husband isn’t the only man in her life. She has dated men from various backgrounds and professions.

Her first rumored relationship was with an American actor Topher Grace who is known for his role in ‘That ’70s Show’. Second in the list is Hugh Dancy, an actor of English descent. Anne Hathaway and Hugh Dancy met on the set of ‘Ella Enchanted’ and got bitten by the love bug. Their romance lasted for two years i.e. 2002 to 2004.

One of her most controversial relationships was with a real-estate developer who later turned out to be a con artist. Anne Hathaway and Raffaello Follieri were regarded as a couple from 2004 to 2008.

But their romance ended when Raffaello went to prison for defrauding his investors. After this tragedy in her life, Anne did not venture into any serious relationship until she found a reliable and trustworthy man in Adam Shulman.

The couple dated for 4 years and then finally married on 29 September 2012. They are still married together and have recently given birth to a second child in 2020.

Anne Hathaway’s religious beliefs have changed due to her family. As a child, she was an out-and-out Roman Catholic. But when her older brother Michael came out as a homosexual and the Roman Catholic Church did not support him, she switched her allegiance to Episcopal Church.

Anne Hathaway is against child marriage and wants to ensure vaccination of every child. She has also fought for the rights of female child, and won an award for her philanthropy efforts. Anne Hathaway is also a strong supporter of LGBT community. She is constantly fighting a battle in Hollywood to establish women equality.

Although Anne has strong English roots, she is a pure-bred American born in Brooklyn. Her father Gerald works in the legal domain and her mother Kate was an actress. As a child, she was inspired by her mother’s work, but initially she wasn’t allowed to pursue acting as a career.

Anne Hathaway was an active child who loved to play soccer and participate in plays. She did her schooling from Millburn High School. After finishing her graduation at New York University’s Gallatin School of Individualized Study, she thought about becoming a teacher, but her love for acting guided her in a different direction.

As Anne Hathaway was prolific in plays, she became a mature performer at a very young age. Although she was involved in a Fox television series ‘Get Real’, her true breakthrough came via a movie called ‘The Princess Diaries’ in 2001.

It was a Disney film that became a hit amongst teenagers and Anne Hathaway became a mainstream actress. But just as there was success, there was also a failure in the form of another Disney movie called the ‘The Other Side of Heaven’.

However, Anne Hathaway in Princess Diaries was so much appreciated by the fans that she was even type casted as a princess and got many similar roles.

But there was another side to Anne as an actress that was unfulfilled and waiting to come out on the screen. So, when ‘The Princess Diaries 2: Royal Engagement’ flopped, she moved on to other roles.

It was a whirlwind ride of emotions and sexuality. The film was successful, and Anne’s transition to a mature actress was complete. She also won several academy award nominations for the movie.

Later in 2006, Anne Hathaway’s The Devil Wears Prada was released. The movie was all about fashion and transformed Anne’s image from a cute actress to a fashionable diva. Her chemistry with veteran Hollywood actress Meryl Streep was also appreciated.

She even played wacky roles in ‘Get Smart’ where she donned the role of Agent 99. From 2009 to 2011, she constantly kept on experimenting with different roles of different shades. She also starred in the multi-starrer ‘Valentine’s Day’ alongside Topher Grace, her former boyfriend.

In 2012, Anne Hathaway movies were regarded as bankable, so she started getting the attention of the biggest directors in the industry including Christopher Nolan. She played the role of Catwoman in ‘The Dark Knight Rises’.

Her performance was regarded as one of the best in the movies. The Batman movie did extremely well and became one of the three highest grossing movies in 2012.

Apart from getting commercial success, Anne Hathaway broke new grounds with her critically-acclaimed performance in ‘Les Misérables’. She played the role of a dying prostitute, and she played with such finesse that she even got a ‘Supporting Actress’ Oscar for the movie.

Anne has also lent her voice in the movie ‘Rio 2’, which is another top-grossing movie in her successful career. In 2014, she starred in a top-of-the-line Sci-Fi movie ‘Interstellar’. It was another megahit for Anne Hathaway and Christopher Nolan partnership.

Immediate Past and Present

Anne Hathaway Ocean’s 8 is one of her most popular recently released movies. It is a female-centric spin-off of the George Clooney-Brad Pitt starrer. The movie did well at the box office and grossed nearly 300 million dollars.

Her more recent films in 2019 include ‘The Hustle’ and ‘Serenity’, which haven’t done too well commercially. But we expect Anne Hathaway 2020 and the future to hold great things for the talented actress.

Anne Hathaway net worth is estimated at a cool 35 million dollars in 2020. The fact that her movies over the years have grossed nearly 7 billion dollars makes her a superstar in every sense of the word. She was also rated as a top 100 celebrity by Forbes magazine in 2009.

Jessica Biel was considered for the role of Selina Kyle/Catwoman in The Dark Knight Rises (2012) and Les Miserables (2012). Both roles in the same year eventually went to Anne Hathaway.

During the audition for The Princess Diaries, Anne Hathaway accidentally fell off of her chair. It was this mishap that landed the role in her lap.

Before Anne Hathaway, the role of Andie Sachs in The Devil Wears Prada was originally offered to actress Rachel McAdams, who declined it.

For her role in The Devil Wears Prada, Anne Hathaway had to wear butt pads to look size 6. Interestingly, she kept the pads she wore in the film.

Anne Hathaway has offered monetary support for organizations in favour of same sex marriage, and has also served as a LGBT rights activist.

In 2016, UN Women chose Anne Hathaway as the global Goodwill ambassador for promotion of gender equality.

Anne Hathaway has been the face of beauty giant Lancome’s fragrance labelled ‘Magnifique’.

During her affair with Raffaello Follieri, Anne Hathaway did participate actively as a member of board of directors for the charitable Follieri Foundation that offered vaccinations to children in Third World countries. However, there was an investigation conducted by IRS on claims of no filing done for non-profit information forms. Hathaway smartly evaded any resulting legal issues by calling off her relationship with Follieri in 2008.

In 2008, Follieri was arrested on charges of posing as the contact person for defrauding investors to put millions of dollars in a scheme based on real-estate investments. As part of the investigations in this matter, Anne Hathaway was drawn into this controversy and FBI had even confiscated her private journals from Raffaello’s apartment in New York.

In Hollywood you have to be careful if you go above a six, then you`re considered fat. I`m considered to be, I hope, an actress, and you can get away with a couple of extra pounds if you are trading on your talent instead of your sex appeal. I don`t have time to be tortured about my weight. I disagree with a couple of the stances of the Catholic Church. My older brother is gay and it’s important for me to be able to love him completely and freely and it’s important for me to spread beliefs in the world that are not going to limit people in their love.I can’t support a religion that doesn’t support my brother. I used to believe that love was finding someone who would lead you through the deep water. Quite frankly, I didn’t become an actor to become a movie star. I have never dreamed about being the most famous person on the planet. I just want to do really good work. I believe I’ve always been a big believer in equality. No one has ever been able to tell me I couldn’t do something because I was a girl.
- Advertisement -
Facebook
Twitter
Pinterest
WhatsApp
ReddIt
Previous articleAngelina Jolie
Next articleArnold Schwarzenegger
Fans Era