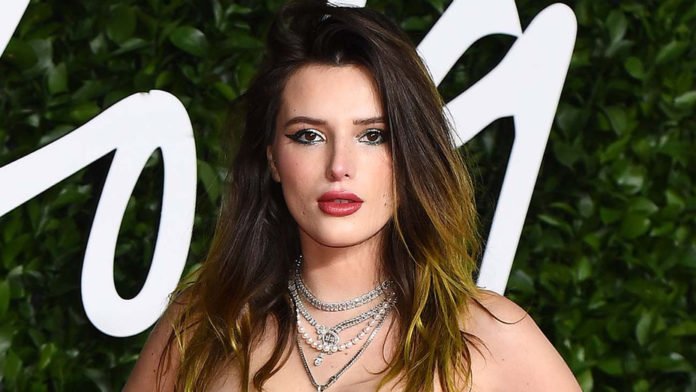 Not many people in the showbiz industry start as early as Annabelle Avery Thorne, popularly known as Bella Thorne. She got her first taste of showbiz as an infant of just 6 months old.

In her young life so far, Bella has spent more time modelling and acting than any other men and women of her age. She has garnered fame with Disney’s ‘Shake It Up’ and moved on to greater things as an actress, model and singer.

One of the biggest reasons for Bella’s fan following across the globe is her immense social media presence. She is a true-blood next-gen personality and a role model for kids and teenagers around the world.

However, her story is not all fairy tale but also filled with the devilish darker shades of humanity. This is the reason why; she has played an active part in the popular #MEETOO movement and has confessed to be sexually abused from age 6 to 14 years old.

It is a horrific truth of life, which she hid from the world while she was laughing, singing and dancing around and bringing joy to millions as a teenage sensation.

After emerging from her harrowing childhood, Bella became stronger as a person. Bella’s first known relationship was with Tristan Klier. The couple were in love for sure, but due to Tristan’s aversion to Bella’s celebrity status, the relationship ended.

In 2015, Bella confirmed that she was dating Pamela Anderson’s (Baywatch Fame Actress) son, Brandon Lee. Most people thought that their romance would last forever, but it did not meet up to the expectations.

Bella had a brief fling with Ryan Nassif, which became all too famous because of their kiss at a basketball game. The same year she had a short relationship stint with a British actor named Gregg Sulkin. Once again, the romance did not last long.

Bella Thorne and Charlie Puth – an American singer – were spotted at a beach and it caused some chaos on social media. The reason for the chaos was Bella’s other simultaneous relationship with Tyler Posey.

Charlie had to apologize to Tyler on social media that he did not know about their relationship as Bella never told her. Bella’s response to this was that her relationship with Tyler was over. No one actually knows the real truth behind this love triangle.

Bella’s dating got even more complex as she started dating both YouTuber Tana Mongeau and rapper Mod Sun at the same time. She even confessed that she liked to be in a polyamorous relationship, and it does not matter if the person is a man or woman.

Bella Thorne 2020 relationship status is that Bella Thorne and Benjamin Mascolo (an Italian singer) are going strong as a couple. They had to separate for almost 6 months due to sudden Covid-19 outbreak, but they have finally got back together.

Bella Thorne was born into a Christian family. She has been a frequent church-goer in the past, but her current stance towards religion is not very clear.

Bella Thorne has very liberal views when it comes to politics. As far as interests and hobbies go, she likes to play sports, dance and party. She also likes spicy food, especially a pasta dish called Ravioli. Her favorite colors are blue, pink, red and green.

Born as Annabella Avery Thorne, Bella hails from Pembroke Pines, Florida. Her parents are Reinaldo Thorne and Tamara Thorne. She was born on 8 October 1997, and is the youngest child in the family. She has a Cuban-American descent as her father has Cuban ancestry.

She started her modelling career as a baby of six months old. When she was in class 1, Bella Thorne dyslexia was discovered. She was bullied in her school as many of her peers thought her to be weird because of her inability to read and write.

Therefore, she quitted school and started home schooling. When she was 10 years old, she lost her father to a car accident. This incident made their family very poor, which is why; she started modelling from a very young age.

She has since endorsed for many popular brands like Publix, Tommy Hilfiger, Ralph Lauren, KFC, ALDO KIDS and JLO (a brand by the famous singer Jennifer Lopez).

Bella’s career started off as a model, but she later became a famous actress and singer.

Beginning of a Promising Career

Since the very beginning, Bella was involved in small-scale acting projects including a sideline fan appearance for the movie ‘Stuck on You’ when she was just 6 years old. Then came bits and parts child roles in popular shows like ‘The OC’ and ‘Entourage’.

Although her roles were small and mostly as a child artist, they definitely got her the eyeballs that every new actor aspires for. She even played the popular part of ‘Margaux Darling’ in prime-time drama series ‘Dirty Sexy Money’.

In the year 2008, she was bestowed with Young Artist Award for her acting performance in a drama series called ‘My Own Worst Enemy’.

Bella’s career brightened up when she took the role of CeCe Jones in Disney’s situational comedy called Shake It Up. Bella Thorne in Shake It Up was absolutely adored by the fans.

Bella Thorne co-starred alongside Zendaya in this dance-themed show. Bella even took a few lessons to improve her dancing skills for the show and it all payed off well as Bella Thorne and Zendaya became a successful partnership.

Later, she starred in a web series called ‘Little Monk’ where she played a friend of the protagonist. She also appeared as a popular singer in the famous children’s movie ‘Alvin and the Chipmunks: The Road Chip’.

In the past, she exclusively did comedy movies and kid-centric projects, but as she matures her acting skills are improving every day. With projects like ‘Famous in Love’ and ‘Assassination Nation’, she has shown her maturity as an actress.

More recently in 2020, she has made an appearance on the ‘The Masked Singer’. Although she was eliminated early, she definitely sent the social media abuzz with her participation.

She has even made a record of sort with her very first appearance on a UK-based content subscription service called ‘OnlyFans’. She earned 1 million dollars within 24 hours of joining the British platform.

In the near future, she is expected to star in two movies ‘Habit’ and ‘Chick Fight’ directed by Janell Shirtcliff and Paul Leyden respectively.

Bella Thorne net worth is estimated at 12 million US dollars. Considering her very young age, it is quite an achievement for the young star. She has earned most of her money from acting, social media and modelling.