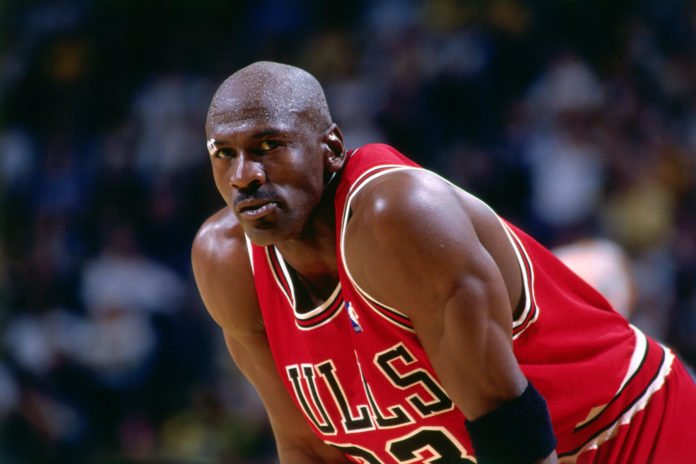 There has never been a basketball player like Michael Jordan in the entirety of the NBA history, and probably there never will be. Numbers and stats aside, MJ was something else when he had the ball in his hand and air under his feet.

He had a huge role to play in glamorizing NBA and making it popular across the globe. The impact of Michael’s unrelenting personality was visible to everyone in the training sessions and games that he played. Despite being extremely talented at the Shooting Guard (SG) position he played at, there was no shortage of hard work and hustle.

With 6 NBA championships and 6 finals MVPs to his name, he is one of the most decorated players in the history of the sport.

His ability to jump high and dunk with conviction earned him popular nicknames like ‘His Airness’ and ‘Air Jordan’. After completing his very successful basketball career, he became a successful entrepreneur. At present, he holds the position of the principal owner of the Charlotte Hornets.

The first Michael Jordan wife was Juanita Vanoy. She was a loan officer who met Jordan via a mutual acquaintance. The couple dated for nearly two years before getting married in 1989. Juanita gave birth to Michael Jordan kids, the eldest Jeffery, the second one Marcus and their daughter Jasmine.

However, despite being blessed with a happy family, the couple drifted apart and finally divorced in 2006. As part of her divorce settlement, Juanita received 138 million dollars.

In the present, Michael Jordan is married to Yvette Prieto, a model of mixed Cuban and American descent. Nearly a year after his divorce, Michael met Yvette and they have been together ever since. They married in 2013 at a beach in Florida. The couple are proud parent of twins Ysabel Jordan and Victoria Jordan.

Michael Jordan was born in a Christian family but he is not religious in the truest sense of the word. As far as politics is concerned, he has supported the Democratic party in the past.

He donated some money to the Obama campaign, but he is not a strong vocal supporter of any party. Although Basketball is Michael’s first love, he also likes to play baseball and golf.

Michael was born on February 17, 1963. He hails from the Brooklyn borough of New York City. His mother Deloris was a bank employee and his father James R. Jordan Sr. was a supervisor.

Michael Jordan was blessed with great athleticism from the very beginning, which showed when he started playing multiple sports. He fancied basketball from an early age, but he was also good at football and baseball.

Jordan studied at Emsley A. Laney High School in Wilmington and later joined university’s basketball team. He was a prolific talent and scored consistently for the junior varsity team.

His 25 Points Per Game (PPG) average was simply phenomenal for a player at that level, and it got him noticed. His consistent performances helped him land a basketball scholarship at University of North Carolina.

Michael’s college career started off with a bang and he became the FCC freshman of the year. In his three seasons at North Carolina Tar Heels, Michael had a PPG of 17.7. In 1984, he also won the Wooden College Player of the Year and Naismith awards.

All the success that Michael had in his college career got him the attention of Chicago Bulls. He was picked in the 1984 draft by the Bulls and averaged 28.2 PPG in his very first season.

He also became the All Star in his rookie season, which is a rarity in the NBA. Despite his first season success, he could not do much in his second season as he suffered from a broken foot injury for most of the campaign.

But he came back with a bang in the next season in 1986-87 and scored 3,000 points. The next season was also amazing as he developed into an all-round player. He averaged 35 points per game along with 1.6 blocks and 3.16 steals.

In spite of being really prolific, Michael Jordan was unable to guide the Bulls to NBA success. It could be attributed to a lack of talent in the team. But things changed on the talent front in 1989-80 season after the Bulls acquired the services of Horace Grant and Scottie Pippen.

Although the team improved with the new acquisitions, the title still remained elusive as Bulls kept on getting beaten by Detroit Pistons in the finals. It happened on three different occasions.

Multiple losses to Detroit Piston could be attributed to the physical nature of their play, which was aimed at stopping Michael Jordan. But Michael never gave up and strived hard to get the better of Pistons, and he did it finally in the fourth attempt in 1990-91 season.

Chicago Bulls reached the final where they faced Magic Johnson in a clash against New York Knicks. They beat them resoundingly with a 4-1 series score. Jordan won the final MVP. It was the beginning of a successful era for Bulls and Jordan. They repeated their success again and again in 1992 and 1993.

After a hat-trick of success in NBA, Michael lost his interest for basketball and tried his hand at another sport he loved as a kid – Baseball. Later, he has said that the decision was motivated by his father’s death, which broke him as a person.

Actually, his father wanted him to be a Baseball star, and he joined the Chicago White Sox in the Minor League Baseball to do exactly that. But his career switch was a failed attempt as he could not achieve any success in the new sport.

After a failed tryst with baseball, Michael returned to basketball. Bulls were languishing without Michael with a horrible 55–27 record.

Despite his time away from basketball, Michael did very well in his second coming to the sport. Bulls improved, but not enough to win the championship as they lost out to Orlando Magic in the game 6 of the series.

Jordan is a tremendously gifted basketball star, but that is not his most important quality. He is insanely competitive and that is what made him the player we all know.

The loss to Orlando inspired him, so much so, that he worked harder than ever before and went on to win triple championships again in the next three years i.e. 1996, 1997 and 1998.

Michael Jordan formed a terrific partnership with Scottie Pippen, which many believe was the reason for his phenomenal success. He is considered to be the Greatest of All Time (GOAT) in the game, and there are not many who will doubt that.

Thanks to the Internet, you will find many forums that will have comparisons like Michael Jordan vs Lebron James or Michael Jordan vs. Kobe Bryant. But if there is an actual poll, then Michael will definitely be declared the winner.

Michael Jordan worth to the game is unmeasurable, but his net worth is estimated at a whopping 2.1 billion dollars. In the 1997–98 season, Michael Jordan salary for a year was 33,140,000 million dollars, which is still the most an individual NBA player has earned on a single-year contract.

Cristiano Ronaldo’s Car Collection: What You Didn’t Know Yet