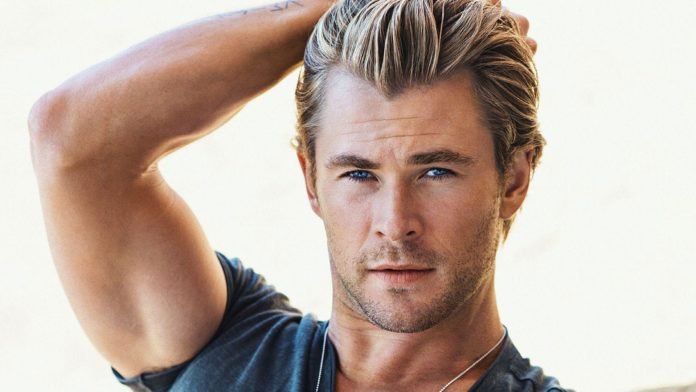 Chris Hemsworth is an actor of Australian origin, very well-known around the world for playing superhero Thor in Marvel’s ‘Avengers’ movie franchise. Apart from being a part of the ensemble cast in Avengers, he also has three standalone ‘Thor’ movies to his name. Hemsworth is admired for his dashing personality and unbelievably good looks apart from his obvious acting talents.

At the age of 21, Chris started his journey in the showbiz industry with an Australian TV series called ‘Home and Away’. Later, he moved to America and starred in several hit Hollywood movies. He is now recognized as an A-List actor, and has a tremendous fan following around the globe. One of the biggest reasons for his fan following is his envious god-like body (after all Thor is a god), and he has even launched a Chris Hemsworth mobile app (in 2020) that is dedicated to fitness.

Chris Hemsworth has been in a relationship of 10 years with Elsa Pataky. After meeting through mutual acquaintances at the start of 2010, both tied the knot later that year in December. Although Chris Hemsworth wife is nearly 8 years older to him, the two share an amazing bond of love and care. The couple have three children together – India, Sasha and Tristan. India is the elder daughter while Sasha (daughter) and Tristan (son) are twins.

When it comes to faith, Chris Hemsworth is a catholic. He is a philanthropist who supports the cause of traumatized kids. Chris supports Australian Childhood Foundation (ACF) that works for the welfare of kids who have suffered from abuse and violence. As far as interests go, he is an outdoor person who loves to spend time with his kids. He is a fitness freak and works out six days a week. He takes great care of what he eats and Chris Hemsworth diet is a matter of intrigue for most of his fans.

Chris Hemsworth was born and brought up in Melbourne, Australia. His mother was an English teacher and his father was a counsellor in social services. Chris has Scottish, German and English ancestry. He lived in a middle-class family with his two siblings, Luke and Liam, who are both actors now. Chris’s early life was lived in the Australian outback and he spent a major part of his childhood enjoying the wild. As far as education goes, he had his high school education at Heathmont College in Heathmont Victoria.

Beginning of a Promising Career

As a child, Chris was very adventurous and involved in activities like surfing. But soon, he
grew concerned about his family and wanted to pay off his parent’s home loan. This is the
main reason why he got into acting. Hemsworth began his career in Australian TV shows
like ‘Guinevere Jones’, ‘Neighbours’ and ‘Marshall Law’. Later, he moved to Sydney to act in
a soap opera called ‘Home and Away’ and was part of the cast in 171 episodes.

The role of Kim Hyde in the show ‘Home and Away’ made Chris popular in his home country and he even got the opportunity to appear on the 5 th season of ‘Dancing with the Stars Australia’. Somewhere around the same time he auditioned for the role of ‘Thor’ alongside his younger brother Liam. Not many know that his dancing exploits were viewed in a negative light by the moviemakers and he almost did not get the part. The casting team were apprehensive that if a dancing Thor would be appreciated by the audience. But ultimately, he got a second audition, and he was able to convince them that he was the right candidate for the role. In 2009, he played a short cameo in the movie ‘Star Trek’, which received critical acclaim despite his role being only 5 minutes long. It showed everyone that he can act. Before Thor was released, he also did secondary roles in movies ‘A Perfect Getaway’ and ‘Cash’.

‘Thor’ released in 2011 and became a blockbuster hit. Suddenly, Chris Hemsworth became a star and developed a cult fan following amongst comic lovers. Since then, he has appeared 8 times as Thor in the Marvel movie universe. He has always been loved and showered by praises by fans, for the portrayal of arguably the strongest superheroes in the franchise. Apart from playing the god-like Thor, Chris has also excelled in other genres. ‘Rush’ (2013) is one of his most memorable movies, in which, he played the temperamental race car driver James Hunt. He has also performed brilliantly in ‘The Cabin in the Woods’, a horror comedy released in 2011.

Thor is not the only movie franchise that Chris has been part of in his career. He has starred as ‘Eric the Huntsman’ in the ‘Snow White and the Huntsman’ movie series. Chris has tasted success in most of his acting endeavors, but the road hasn’t always been rosy. One of his movies ‘Blackhat’ (2016) failed miserably at the box office and he received negative reviews for his portrayal of a hacker. It is probably because the image he has created in the industry as a hunk. After all, how can one expect people who aspire to be him and follow Chris Hemsworth workout to believe that he can sit all day in front of the computer and has a body like that. Simply does not make sense!

Other notable entries in Chris’s movie career are ‘Ghostbusters’ in 2016 and ‘Men in Black International’ in 2019. However, his most recent film is ‘Extraction’ (2020), which was released only on web streaming platforms due to the unfortunate Covid-19 outbreak.